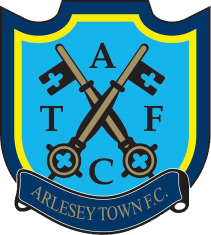 Arlesey Town are a club who have won the FA Vase at the famous old Wembley Stadium. Based in a small village in Mid Bedfordshire they certainly have done very well to achieve the dizzy heights of the Southern League Premier Division having won promotion in season 2010/11 from The southern League division one central.

Under the Guidance of new manager Rufus Brevett the ex QPR player the club are rebuilding a very good squad of players.