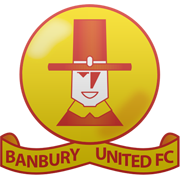 Banbury United Play in the Southern League Premier division and have been there since the 2004/15 season having many threats of relegation having built up a good squad of players only to see them leave for financial reasons.

Under the guidance of Edwin Stein for the last few seasons the club have competed well in the league.

In season 2-13/14 the club had a very decent first half of the season and at one stage were looking at a play off position. However their form began to drop and the club finished in 19th position missing out on relegation by just 3 pts.

Stien left the club in August 2014 after a a very poor opening to the season.