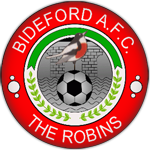 Bideford from north Devon won promotion to The Southern League Premier Divison in season 2011/12 from division one south and west. The club under the guidance of  manager Sean Joyce pushed the club to a very creditable 8th position in the league in season 2013/14.

The clubs playing record for season 2013/14 is as follows