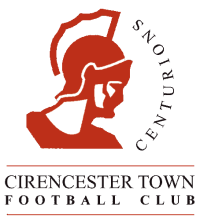 Cirencester are new comers to the Southern league Premier Division having secured promotion as champions of the southern league division one south and west in 1013/13 season.

Under the guidance of Brian Hughes and his assistant Kevin Willetts the club now have the opportunity to establish themselves at the higher level.

The Centurions playing record in season 1013/14 was as follows