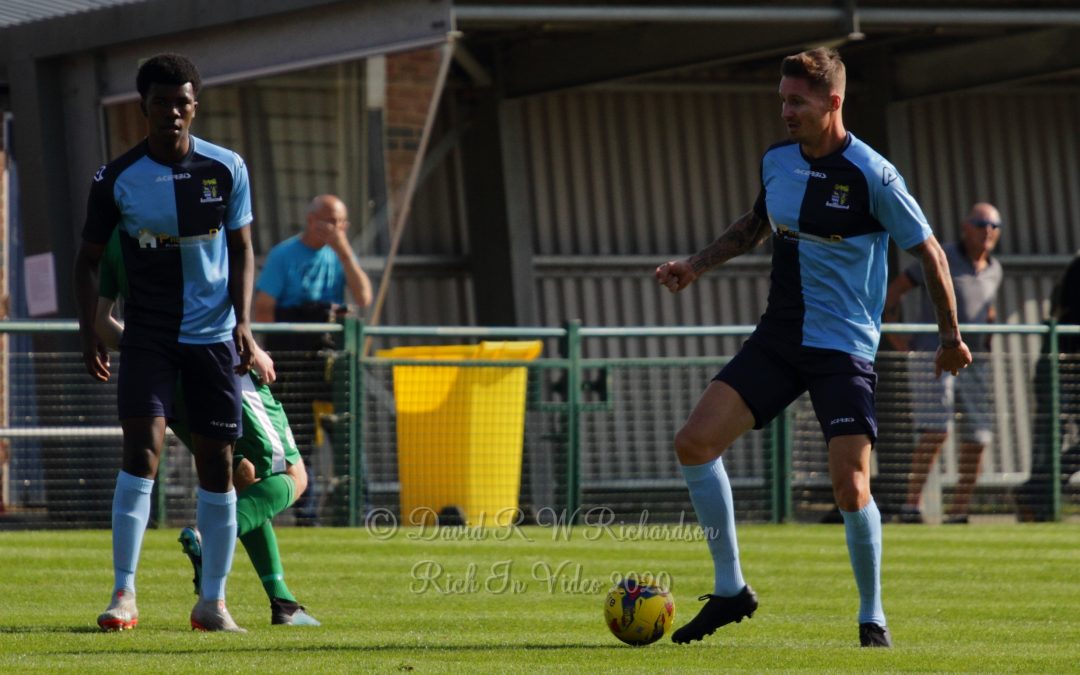 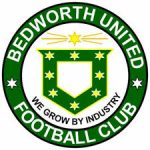 It was one point gained but two points lost as St Neots kicked off their second season in the Southern League Division One Central.   Having finished a good first half with a deserved goal two minutes before the break, St Neots conceded an equaliser soon after half time and then saw visitors Bedworth reduced to ten men with 28 minutes left.     However, they failed to make their numerical advantage count as Bedworth resorted to defending their point and practice frustrating time-wasting tactics that resulted in five added extra minutes without any reward for the home side.

With defender Sam Goode injured Manager Barry Corr stepped into the side for his first ever appearance in St Neots colours and his calm, efficient marshalling of his defence meant that goalkeeper Louis Chadwick was seldom tested.   Also, back in the side was Aaron Smith in a midfield role with Adrian O’Hara left on the bench.

St Neots created enough openings to have claimed full points, but their finishing was sometimes awry, and they failed to afford enough openings for Leon Lobjoit whose fifth goal in three matches is a promising pointer for the future.   There was also a first-class performance from Man-of-the-Match Liam Bennett.

In front of a very healthy crowd St Neots began well with Joe Sutton beating his marker to shoot across the face of goal and Leon Lobjoit sending a curling free kick narrowly over the crossbar.  Much of the early play was end-to-end but apart from one shot into the side netting, the visitors were unable to create a positive chance.

Sam Gomarsall shot high over the bar after good work by Liam Bennett and Lobjoit headed narrowly wide.   Bedworth were beginning to show frustration and defender Sam Walton was booked as he pulled Lobjoit back after the St Neots player had cleverly gone past him.   St Neots keeper Louis Chadwick had little to do but in the 33rd minute he was glad to parry a fierce shot from Josh Steele. Dequaine Wilson-Braithwaite was booked for a late challenge and from the resultant free kick Richard Blythe shot wide from Bedworth’s best first half chance.

Then two minutes before the break a cleverly created goal gave St Neots a half time advantage as the hard working Bennett won the ball in midfield and swept it wide to the unmarked Sutton whose early cross was converted from close range by the alert Leon Lobjoit.

Straight after the break St Neots took the initiative again as a Lobjoit free kick saw Tom Dickens rise above the defence to head narrowly just the wrong side of a goalpost, and then Gomarsall had a shot deflected and from the resultant corner a Barry Corr header was also deflected wide by a defender.

St Neots skipper Lee Watkins also picked up a yellow card after 52 minutes and two minutes later the visitors equalised as the St Neots defence made their first mistake allowing Mitchell Piggon time in the box to volley home a cross from Reece Blackmore. As St Neots tried to reply, Lobjoit almost reinstated his sides’ lead with a stinging free kick that visiting keeper Daniel Crane was pleased to push over the bar and after 52 minutes Bedworth were reduced to ten men when a rash scything challenge on Aaron Smith by Liam Truslove earned him an early bath. Bedworth then swiftly reappraised their tactics with both strikers substituted and most of their players pulled back behind the ball, with defence their primary objective.

Ironically the closest St Neots came to snatching a winning goal was when a careless back pass forced visiting keeper Crane to the save of the match as he threw himself full length to touch the ball around a post for a corner.   St Neots had almost all the possession and six corners in the last fifteen minutes but apart from a Bennett shot being blocked on the line by the packed defence, the visitors held out almost comfortably to claim their point.

Full photo gallery of today’s game can be found here: