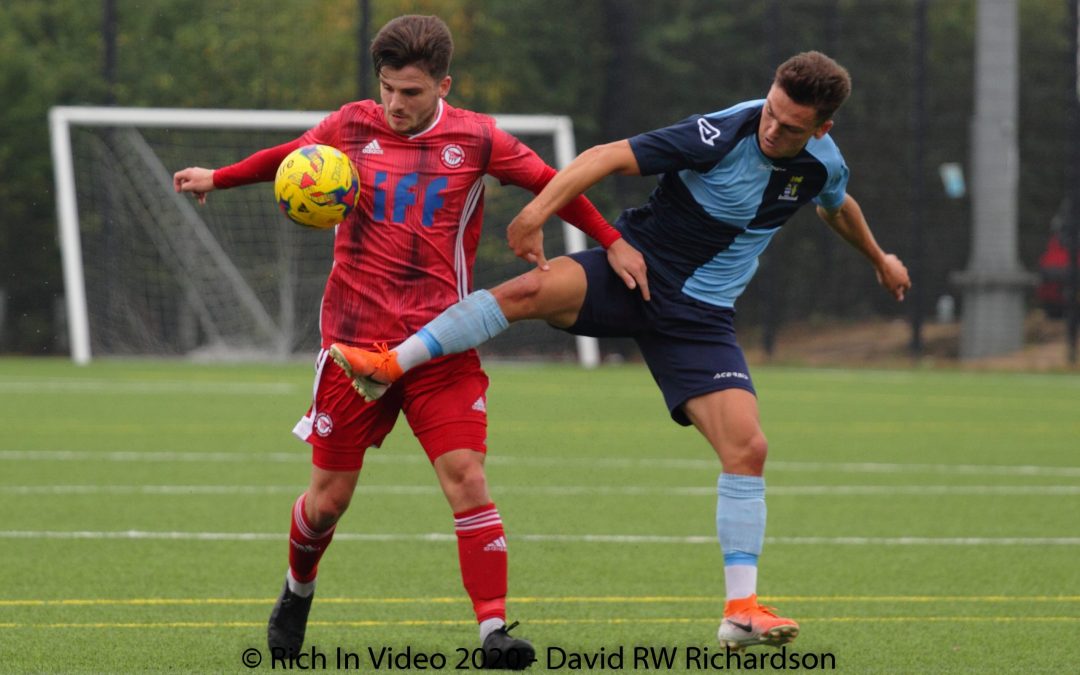 Another very useful work-out for St Neots as they continued their build up to the new season.  The visitors were Haverhill Rovers managed by St Neots former boss Marc Abbott and after early morning rain the match was staged on the 3G surface adjoining the main pitch.   Several of the players attached to Cambridge United were with their home club so it gave the full St Neots squad the chance to stake their claim for a starting berth.   It was a competitive and entertaining match as suggested by the final score line.   St Neots paraded their two recent signings up front and it took them very little time to settle in and display their potential with both on the score sheet in the opening fifteen minutes.

St Neots began well and around the eighth minute Leon Lobjoit leading the attack had one effort well saved by visiting keeper James Philp and saw a second attempt blocked by a defender.   Four minutes later he left his marker in his wake and sent over a diagonal cross that released Ryan Robbins to open the scoring with a clever, angled finish. After 15 minutes, Leon Lobjoit added his name to the score sheet with a crisp finish from 25 yards.   Within two minutes Haverhill clawed their way back into the game when former Saint Ben Bradley sent in a free kick which wasn’t cleared and Jonny Butler netted from close range.

The match continued to be an end to end affair and Philp made a great save to deny Sam Gomarsall, but Haverhill were sharing play and after 34 minutes the scores were levelled at 2-2 when Bradley set up Ryan Gibbs for the visitors’ second goal. Parity only remained for sixty seconds before Sam Gomarsall beat the visiting keeper from fully 30 yards with the goal of the match, cutting in from the right and unleashing an unstoppable left footed drive into the top left hand corner of the visitor’s net. Once again, Haverhill responded but a minute before the break Leon Lobjoit claimed his second goal of the contest netting from a Lee Watkins corner to give the home side a 4-0 half time advantage.

Ben Bradley had two good chances early in the second half to reduce the deficit, but he shot wildly wide after a defensive lapse, before again being off target after a sweet move.   Just past the hour the St Neots Manager Barry Corr opted to make a wholesale change replacing his entire outfield players with the youth team. For a while, the game became less productive with neither side looking as sharp in attack as they had earlier in the match. The closest to a goal was a well struck free kick by Rajan Badiani that beat Philp but rebounded from a foot of a goal post. Then, with two minutes left, Haverhill created a late consolation goal when Ryan Gibbs was left unmarked and he beat Lew Chadwick at his near post.