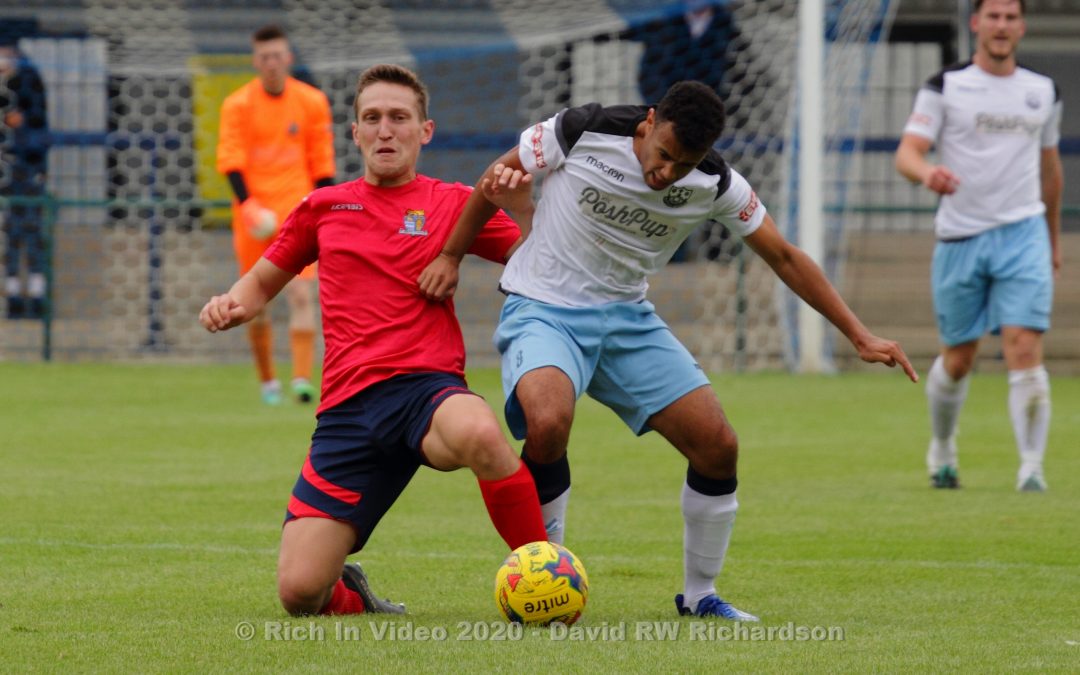 St Neots fourth home pre-season run out produced an evenly fought contest with Ryman League neighbours Cambridge City, but St Neots had to show commendable character to come back from a two goals deficit – both conceded in the opening fourteen minutes.   City enjoyed a spell of early second-half superior possession but failed to add to their narrow lead and St Neots came back to snatch a deserved second goal two minutes from time to share the spoils.   They now prepare for a midweek FA Cup debut at Spalding where they face tenants Pinchbeck United in their first competitive outing in the new season.

The first half was played at a relentless pace with the end-to-end attacking play entertaining the good early afternoon batch of spectators. St Neots created the first chance after four minutes with Leon Lobjoit cleverly lobbing Dan George in the visitors’ goal, but his effort was just too high. Five minutes later City went ahead as a poor St Neots’ clearance found Isaac Maynard twenty yards from goal as his low angled shot beat Lou Chadwick who appeared to be unsighted. Joe Sutton then tested George who twisted in the air to push his effort over the bar.  After 14 minutes it was 2-0 to the visitors thanks to some shoddy defending as Jarid Robson was left unmarked to collect a ball over the defence to beat Chadwick from close range. 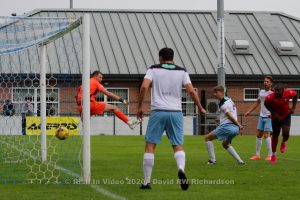 St Neots set about repairing the damage and both Lee Watkins and Lobjoit had efforts blocked by a resolute visiting defence. Then after 18 minutes Lobjoit turned provider as he found strike partner Ryan Robbins in space and he slotted past George. Both sides had further chances but there was no more first half scoring.

St Neots half time change saw Adrian O’Hara replacing Tariq Dallas the heart of the home defence and with City making several changes the game became rather sterile after the breathless first half. Defences dominated – open chances were few but after 69 minutes former Saint Youth skipper Ryan Sharman almost increased City’s lead with a speculative lob that beat both the keeper and the crossbar. St Neots began to compete and two minutes later Lobjoit produced a burst of pace to pierce the visiting defence, but his low shot clipped the outside of a post. 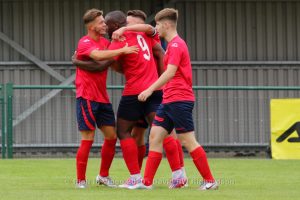 Robbins was caught narrowly offside after good work by Sam Gomersall and there was concern seven minutes from time when Lobjoit limped off injured after a heavy tackle to be replaced by Max Smalley.

St Neots persevered and were rewarded two minutes from time when Ryan Robbins claimed his second goal, cooly slotting home past the keeper, after a defence splitting through pass by Jake Battersby.