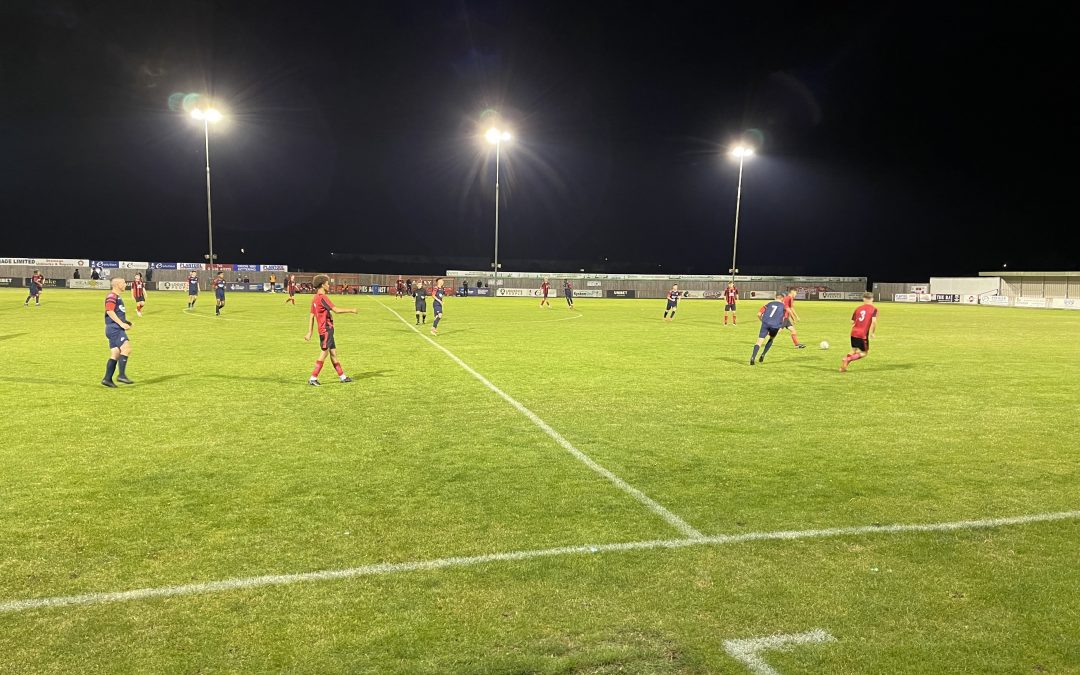 St Neots progressed to the Second Qualifying Round of the FA Youth Cup with an assured away victory over Kettering Town U18.   It was the first time for six years that they had won two matches in the competition, and they must now travel to face Rugby Town U18 in the next round in two weeks’ time.

The result avenged a home defeat by the same opponents’ last season.   The outcome was effectively decided by half time when the visitors rapped in their four goals and despite a spirited second half from the home side the result was never seriously in doubt.

St Neots made the perfect start moving ahead after just seven minutes when Marley Ugarte-Edwards met a cross from Julinho Gomes to beat home keeper Sam Sweke.   Four minutes later the lead could have doubled as Newman Nshangalume sent a towering header the wrong side of a post from a free kick.   The only attacking reply from the home side came after 19 minutes when Jack Empson ran at the visiting defence but shot high over the bar, and four minutes later St Neots extended their lead as Julinho Gomes outpaced his marker to go clear and when the keeper parried his first effort he followed up to net from close range.   As the first half moved into its final minute Gomes turned provider to set up Marley Ugarte Edwards to make it 3-0 with his second goal of the match – his ninth in four games this season.   That would have been a good haul for the first half but in time added there was a fourth goal for the visitors when Kacper Kobus pounced on some sloppy defending to make it 4-0 to the visitors.

What was said in the home dressing room at half time is not recorded but it was a different more positive Kettering side that resumed after the break.   Before the hour visiting keeper George Anthony had to throw himself bravely at the feet of Connor Duncan to save but the home side were not to be denied and after 66 minutes Jamie Buck pulled a goal back for the home side.   Now St Neots had to be resolute in defence with centre backs Rhys Perry and Ethan Camfield in the thick of the action.   On the break substitute Max Smalley had a shot blocked on the line as St Neots regained some composure but on the half hour Kettering struck again.  With St Neots skipper Ryan Thomas on the ground awaiting attention Kettering took their chance and when Jack Cawkill’s initial shot was blocked he followed up to make it 4-2.   St Neots regrouped and looked comfortable in the final few minutes with Ugarte-Edwards close to further extending their lead as the clock ticked down.