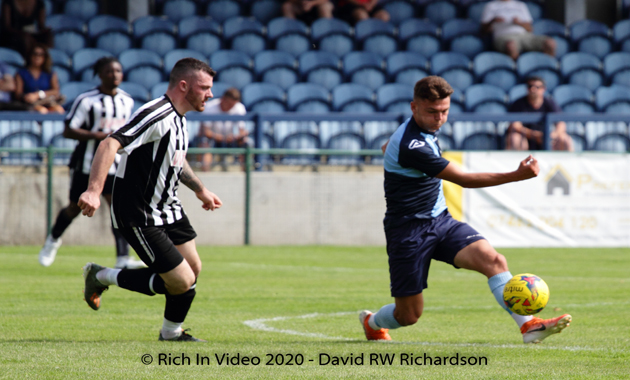 St Neots Town emerged from their enforced COVID break, which had lasted for 154 days, albeit behind closed doors in a pre-season dual with South Midlands League neighbours Bedford FC who are managed by former St Neots stars Ollie Thorne and Gavin Hoyte.   It was an extremely useful and entertaining opener with St Neots playing the second half with no fewer than ten under eighteen players – most of whom were getting their first taste of senior football.    St Neots fielded only a few survivors from last season with several young Cambridge United loanees and a sprinkling of trialists and once they had clicked together, they looked a confident unit.

The first half was a good contest with St Neots comfortably dominating after a slow beginning.    Full back Liam Bennett was impressive from the start marauding down the right flank to deliver some testing crosses, but the visiting defence was well organised and was breached only once in the first half hour.  That was after nine minutes when Bennett left his marker in his wake and crossed accurately to find their trialist striker who netted with a simple tap-in opening goal.    The visitors’ best early effort came from a deep cross, but new goalkeeper Lou Chadwick made a comfortable save.   Bennett then cut in to have a shot himself, beating the keeper but skimming the crossbar.   After 29 minutes after the best move of the half Jake Battersby finished with the second goal of the match and seven mutes later it was 3-0 as a free kick was touched to Lee Watkins who fired in a bullet of a shot.  The visitors had the final word in the first half when a slick move breached the home defence for Tyrrell McLeod-Bentley to pull a goal back.

Multiple half time changes by the home side saw almost a completely different line-up after the break with the youngsters give a blooding at senior level.   Bedford enjoyed a greater share of play and twice St Neots were saved by the woodwork and despite the heat play was end-to-end with both defences made to work hard.   After 66 minutes in a bid to inspire his side veteran Ollie Thorne took to the field and his side reaped their reward for their persistence when striker Jamie Barron took on the St Neots defence to fire past second half goalkeeper Dylan Martin for a late consolation goal.